Your shopping bag is empty.

We use cookies to improve your user experience. By using the site, you consent to the use of cookies unless you have disabled them. Learn more | I AGREE
EXTENDED EXCHANGE PERIOD for all orders placed until 31/12 | read more here. 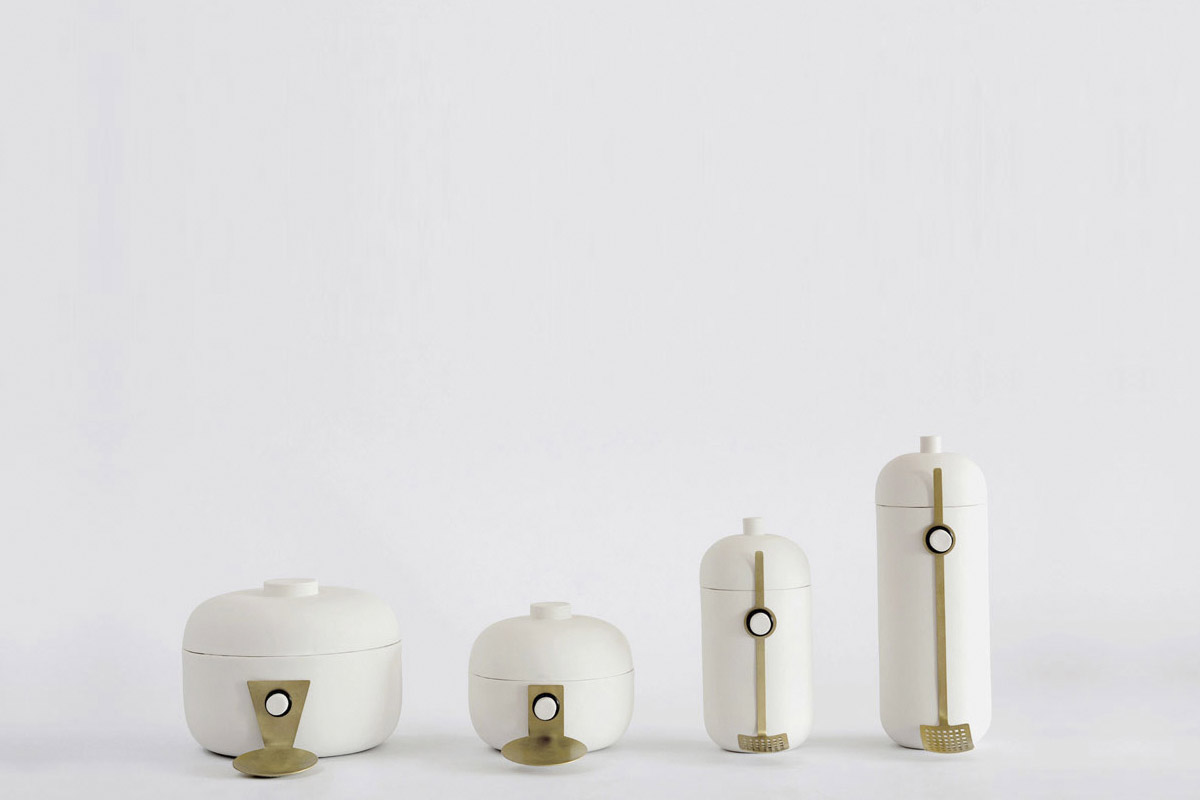 "I think it is important to understand the value of time and expertise that goes into the products we buy." Recently we talked to East London based Natascha Madeiski, who told us more about the beautiful 'Now and Then' collection of ceramics and her way of creating things.


WHO IS THE PERSON BEHIND THE BRAND?

I am originally from Bolzano in South Tyrol in the North of Italy. I studied Architecture in Innsbruck, Austria. After that, I moved to Vienna where I worked as an architect. I have always had a passion for the smaller scale objects and an interest in materials and product based material research.

HOW DID IT ALL START?

In 2007 I relocated to the UK and became a member of a designer/makers research group. I started a collaboration with an Italian manufacturer "Fedrigoni” and developed a lighting installation with them. At the same time, I researched into materials and into how you can manipulate materials and their usage. I have a particular passion for beautiful objects that surround us in our homes. As an architect, you are depending so much on other people and on the fact that, due to the scale many different professions need to liaise together and collaborate. Smaller objects can be more easily self-initiated and manufactured or actually made by hand. 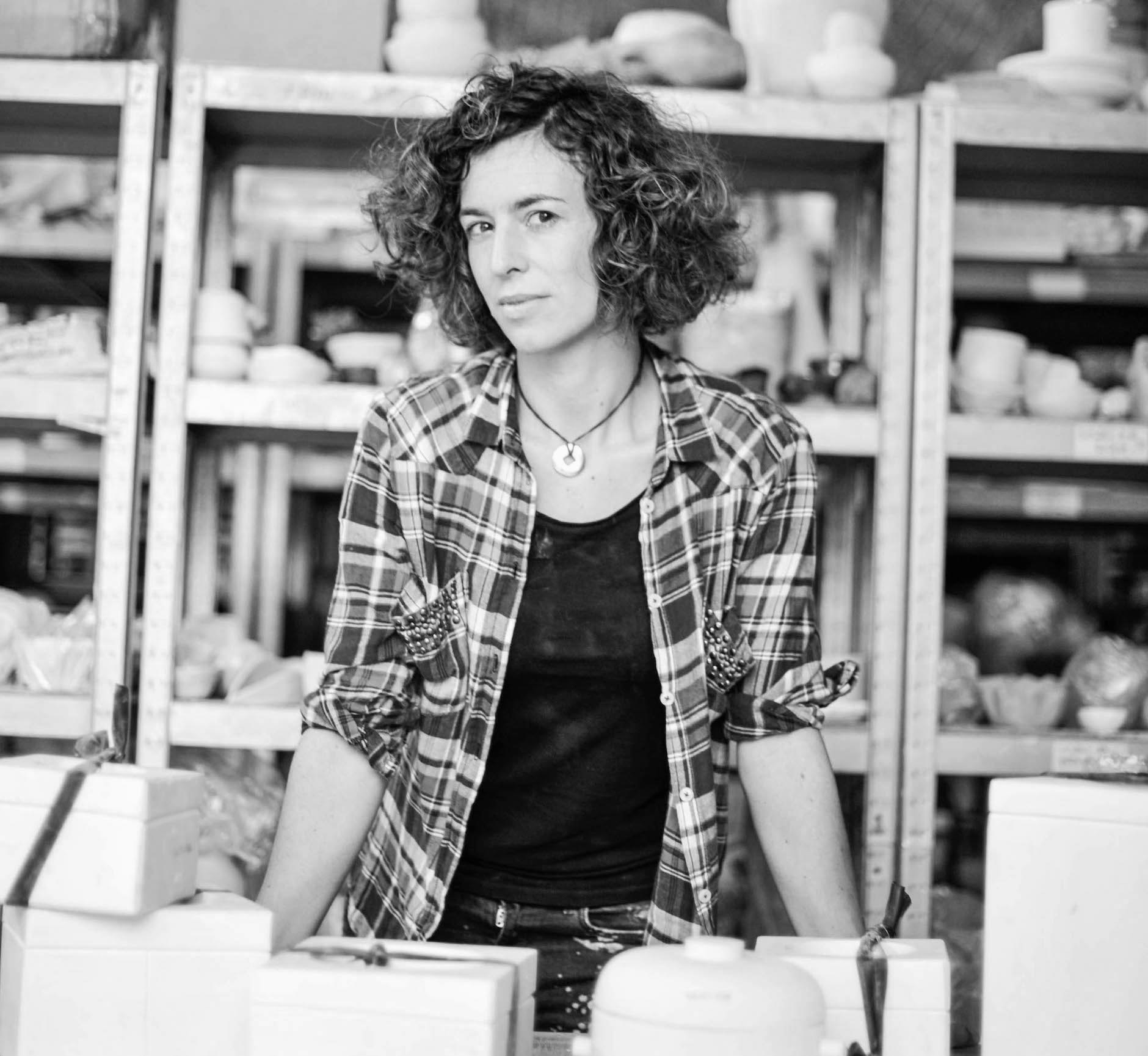 WHERE IS YOUR STUDIO AND PRODUCTION BASED?

My studio is based in East London. Some projects are handmade, others are manufactured outside the studio. I work with some manufacturers in the UK, but I also have a few manufacturers and brilliant craftspeople in South Tyrol that I work with.

I find travelling inspiring, especially when I see places that have very different cultural backgrounds. I like discovering different architecture in various societies and how people make use of their spaces, but also what objects they use. Often you come across a particular craftsmanship or materials that have a long history in some cultures, but not in others – I pick up on things like that and look into how it could be translated into our European culture.

YOU CHOSE TO WORK WITH CERAMICS. WHAT DO YOU LIKE ABOUT THIS MATERIAL IN PARTICULAR?

I think ceramics are such a versatile material, but it is also very durable and eco-friendly. Historically humans have been using ceramics for millennia as it derives directly from the earth. Most of the time I use slip casting technique. I like the technicality of that process and the fact that very clear rules apply to what can and what cannot be done. It’s fascinating how easy it is to do something with ceramics and get an outcome, but it requires a lot of knowledge and experience to be in a total control of it. 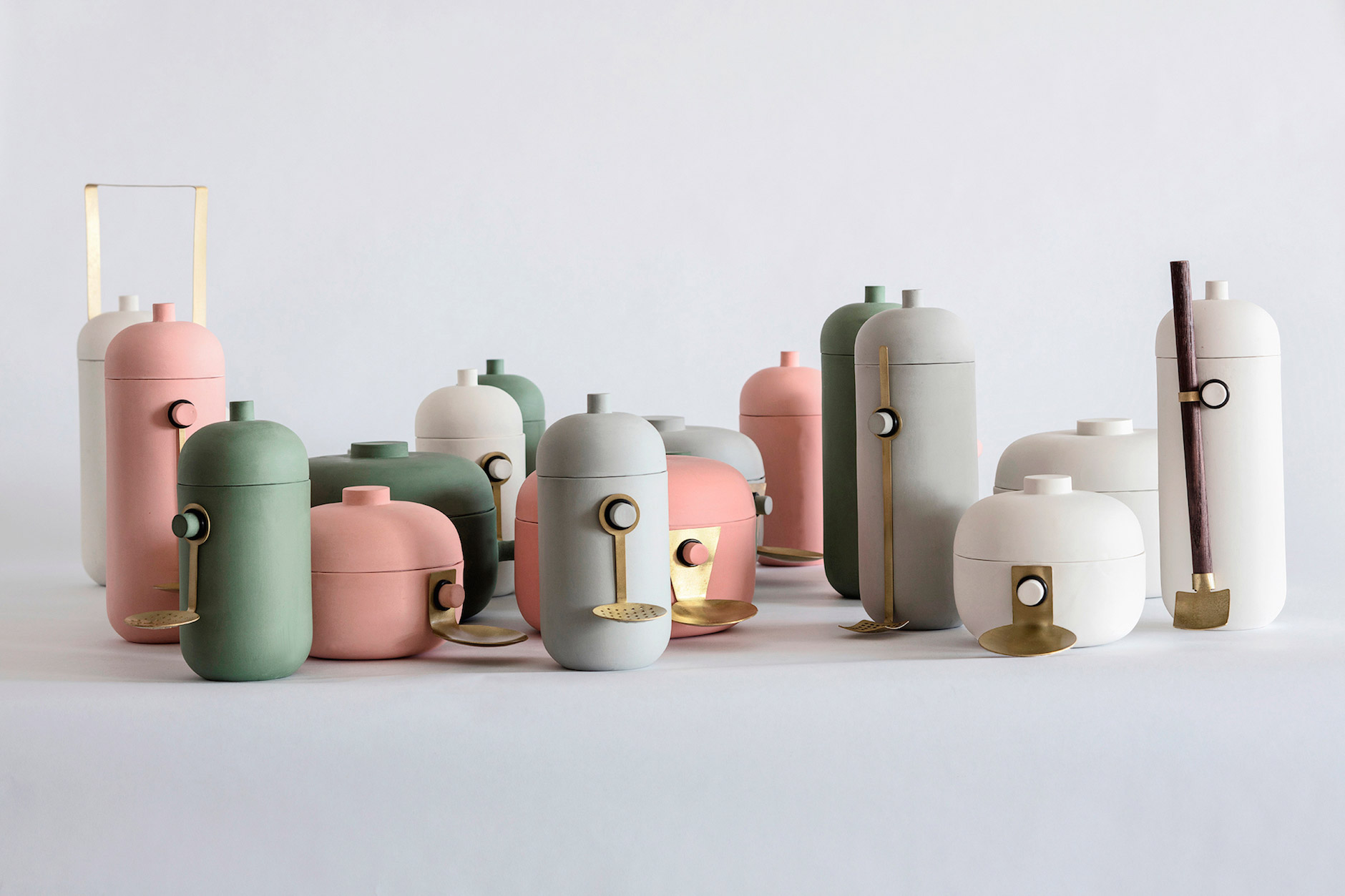 WHAT IS THE STORY BEHIND “NOW AND THEN”?

“Now and Then” is a collaboration between London based jeweller Linnie Mclarty and myself. It was inspired by an archaeological dig in Beirut. The project began with a visit to an archaeological site in Byblos and by pairing ceramics and metalwork and referencing both elements – architectural and historic. What we found particularly interesting was the nature of change. How our ability to re-purpose and find alternative uses for things and the context in which we place those things alter them. On a bigger scale, there are huge, once vertical pillars in Byblos which as fallen objects became structural details of the walls. What once served as vertical layers changed its function when it became horizontal. And on a much smaller scale, we’ve looked at how we re-purpose the everyday objects in our homes. Key for us was the notion of inheritance, heritage and status and, as humans, our dialogue with objects. We have examined what we as individuals see as precious, and how we decide what is worthy of putting into our jars, boxes, and containers. Referencing the traditions of burial objects and the significantly large number of ceramic and metal ‘grave goods’ found in Byblos, the resulting containers paired with their metal tools took on an anthropomorphic quality, becoming almost like soldiers guarding the things inside. Not specifying how our containers with their metal tools were to be used was the key element in the design concept. We wanted each piece to find its own place in the household. We have kept the notion of potential functionality to be unearthed by “future archaeologists”. 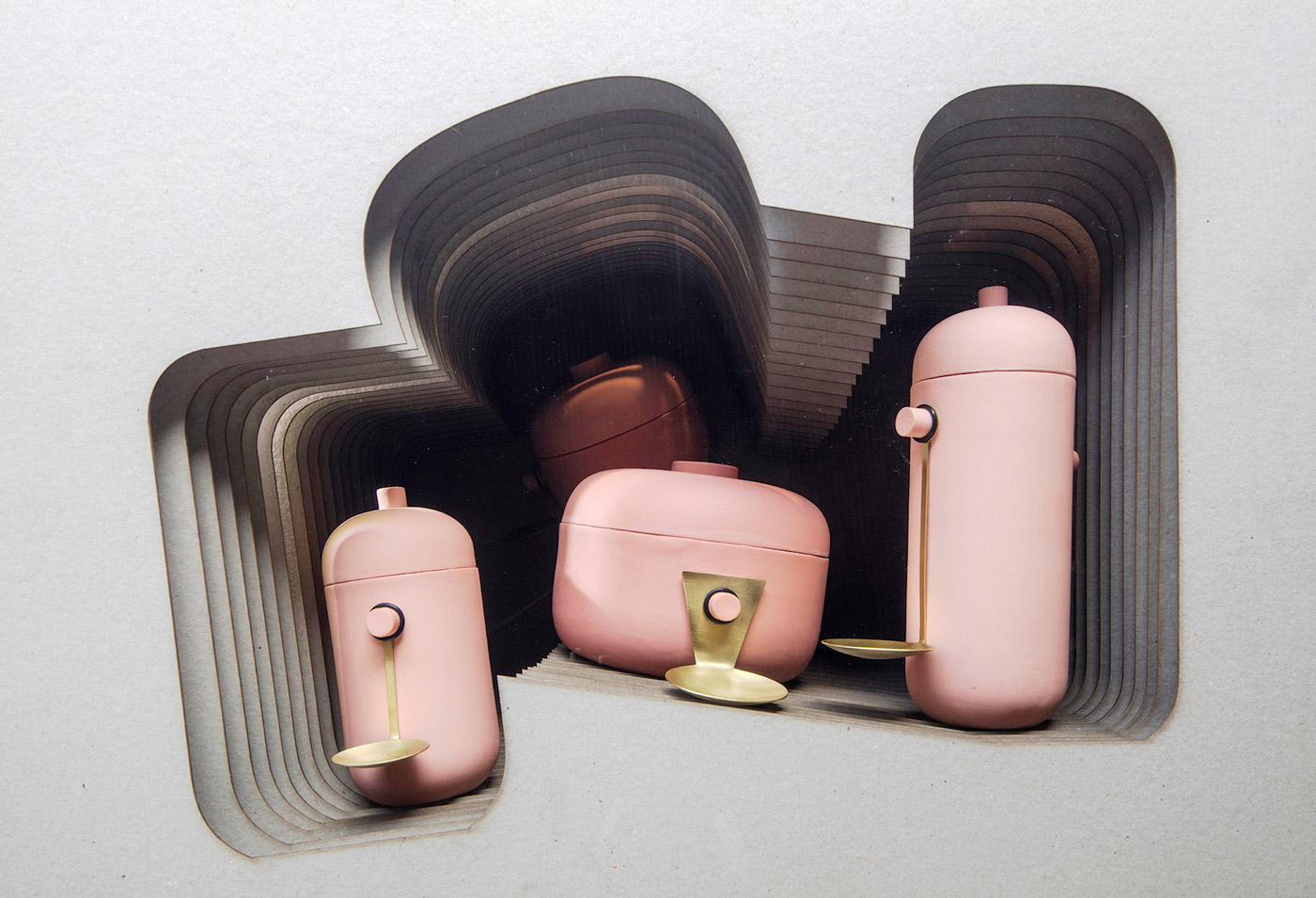 JUST WONDERING, HOW LONG DOES IT TAKE TO PRODUCE ONE OF THE PIECES FROM THIS COLLECTION?

The Now and Then collection is produced by slip casting. The containers have been 3D modelled and then 3D printed and the plaster moulds for slip casting were made from those 3D prints. The whole process of creating a piece involves several steps including a few different drying cycles and two separate firing cycles. In between those the pieces need to be sanded twice. Sometimes pieces don’t work out or break in the firing, but that’s just quite normal when you work with ceramics. In total it takes at least two weeks to get through the whole process of making. The metal utensils are laser cut and then hand finished. 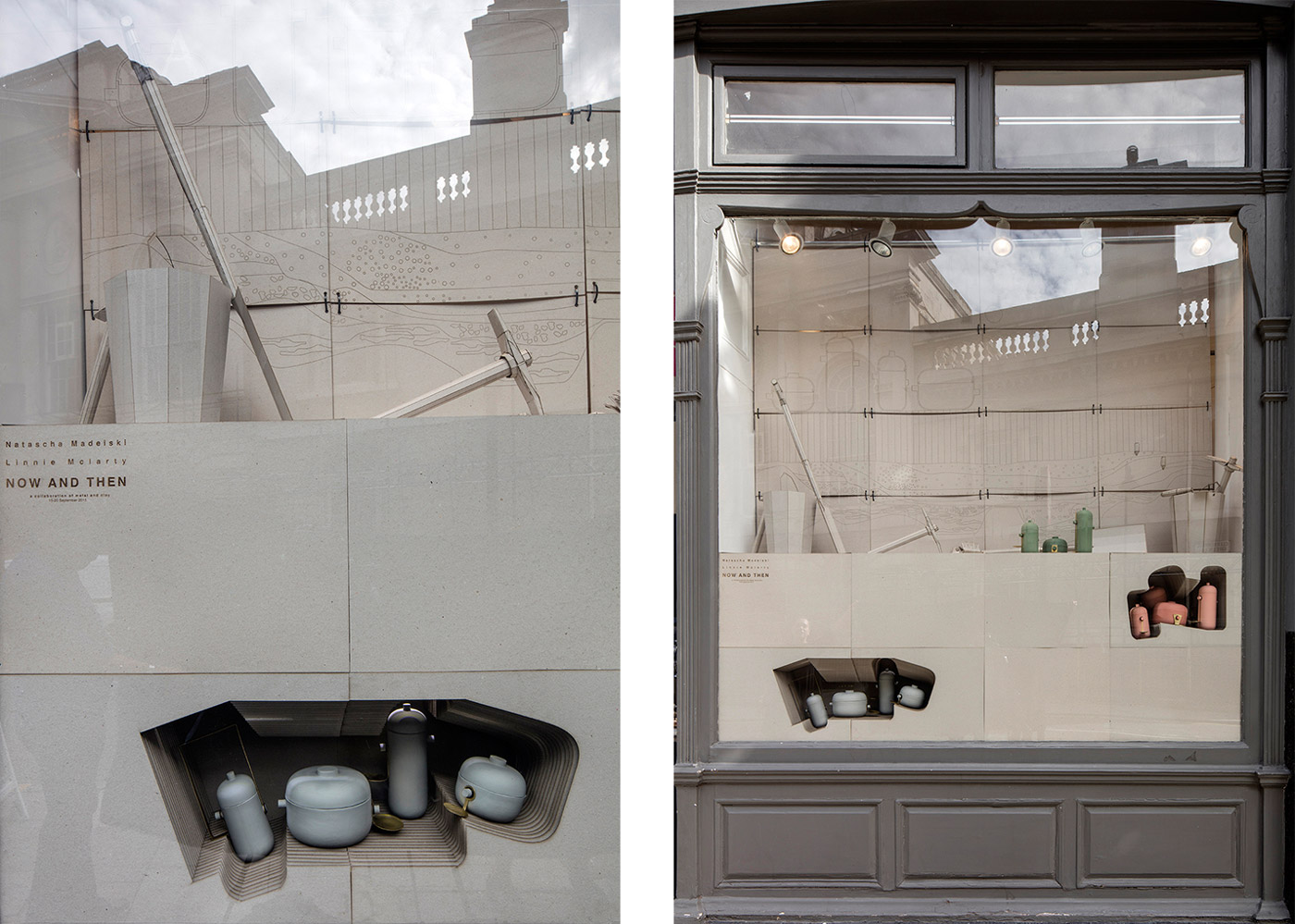 WHY SHOULD PEOPLE BUY HANDMADE DESIGNER CERAMICS RATHER THAN MASS-PRODUCED (FAST FASHION) ITEMS?

I guess our societies are getting tired of over and over the same “High Street” experience. There seems to be a trend by the consumer to actively choose what to buy, rather than buying what they are told to. I believe that it is important to be selective in the choices we make and to get a better awareness of the fact that products that are mass produced very often also exploit societies or single individuals. I think it is important to understand value of the time and expertise that goes into the products we buy because it does directly reflect on the value we give to human labour in general.

I am very selective in what I buy, I don’t like to be crowded by unnecessary things. But I love to discover makers or artists and if possible, to buy directly from them. East London is great for that as there is such an eclectic mix of designers, artists and makers.